“You read too much!” I hear this at least once a week from a certain someone who shall remain unnamed. The thing is, it could be true. I love to read. And I do read all the time. I’ll read anywhere, and just about anything. I’m open to all genres, fiction or non. Because the thing is, I just love a good book.

I’d like to say I’ve always been a reader, but that wouldn’t be true. To be honest, I didn’t want to have anything to do with books as a child. Or a teenager. Or a young adult. Growing up, I’d always felt my life was full, why would I want to read about someone else’s? But then came my early thirties. A stay-at-home-mom ready for some intellectual stimulation, I began my journey into the world of books. And what a wonderful journey it has been. Now, twenty years later, I’m every bit as hungry for the next book as I was the first.

“Have you read anything good lately?” I hear this a lot. If you are a reader, you probably do, too. And my answer is always an emphatic YES. Most of the books I read are “good” in some way.  It might be the unique characters, it might be the intriguing plot, or it might be the beautiful prose. But usually there is something specific that makes a book worth the time it takes to read.

With this in mind, below are five books I’ve read recently that made an impact on me.  Each one might not be the best book I’ve ever read, but all of them contain something that is unique, interesting, or worthwhile.

So go ahead, pick up a book, open your mind to something new, and most of all enjoy. And please, never let anyone tell you that you read too much.

THE DANISH GIRL by David Ebershoff

“Set against the glitz and decadence of 1920’s Copenhagen, Dresden, and Paris, this stunning first novel explores the boundaries of sex and gender, love and marriage.”

Elegantly written, this novel loosely based on the life of artist Einar Wegener and his wife “Greta” exposes the dilemma of a woman who has been born in a man’s body. Set in the early 1900’s, Ebershoff’s characters gently invite the reader into a marriage where the love is real but the pain is intense. His careful and respectful handling of the subject of life as a transgender is both eye opening and intriguing. If you know little about the transgender condition, and watching I Am Cait doesn’t count for much, this book serves as an effective guide to understanding the community of people who are faced with a very real struggle everyday of their lives. Kudos to Ebershoff who helped open a conversation many have been reluctant to join. When Hollywood picks you up, you know you’ve written something special.

“What if you realized the terrifying book you were reading was all about you?”

The premise of this debut novel is one of the best I’ve heard.  Ever. The main character finds a book in her home and after she begins to read it realizes it’s based on a deep, dark secret she’s been hiding for twenty years. Now that’s downright awesome. I had to know more. Admittedly, I don’t read a lot of books in this genre because I either figure out the end before I get to it, or I’m disappointed in it, but this book surprised me. I’ll leave it at that, but if you’re a fan of GONE GIRL or THE GIRL ON THE TRAIN, you will most certainly like this book. For the unexpected twist and the excellent premise, DISCLAIMER is worth the read.

“Sometimes it’s the little lies that turn out to be the most lethal.”

“A hell of a good book. Funny and scary.” The great Stephen King’s quote on the front cover of this book convinced me to pick it up. I mean talk about an endorsement. And I was not disappointed. Moriarty creates the surprising juxtaposition (I love that word) of a murder set against the backdrop of a kindergarten. Who would do that? But she does and it works well to create a satirical feel of humor slapping danger in the face. The characters in this small Australian town are flawed yet likable, and respected yet despicable. Moriarty completes a story filled with love and hate, courage and fear, truth and lies. For the unique way she sets light against darkness while building intriguing suspense, BIG LITTLE LIES is worth the read. 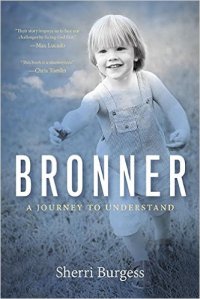 BRONNER A JOURNEY TO UNDERSTANDING by Sherri Burgess

“God teaches and refines us through pain and suffering.”

Okay, I’ll admit, I was not looking forward to reading this book like I look forward to a juicy novel. I knew it would be heavy, I knew it would be sad, and I knew it would be difficult to process. Burgess has written a heartbreaking, heart-healing book about losing her two-year-old son. The book’s purpose, Burgess explains, is to provide a biblical explanation for pain and suffering. Bronner, the toddler her husband nicknamed “Cornbread” tragically drowned in the family’s backyard swimming pool on a cold January night in 2008. This book chronicles Burgess’s struggle to come to terms with the age-old question of why God would allow something as unthinkable as this to happen. The answer comes in the form of another question: why are we put here on earth? The conclusion: life is not about us, it is about God. Burgess and her family have resolutely set themselves to be about the business of God in the face of their pain and they have determined not to let Satan keep them from living their lives accordingly. Reading like a Bible-study at times, BRONNER is filled with scripture passages that guide the reader to discover his/her role on earth as a follower of Christ. For anyone struggling with loss, this book is worth the read. 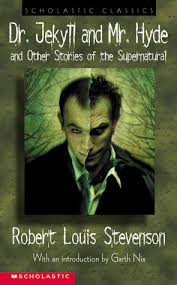 STRANGE CASE OF DR. JEKYLL AND MR. HYDE, the original title of this long, short story, is a quick but fascinating read. Stevenson is said to have written the first draft in less than a week while in poor health, and was thought to have been under the influence of some pretty heavy “medication” at the time. The result of his outpouring is an intense character study of a terribly tortured individual. Although the language is difficult (I had to read a number of those nineteenth century sentences more than once), and the setting is dark, the characters exude an irresistible angst and pull you into their impossible predicaments. Stevenson had me at: “My devil had long been caged; he came out roaring.” Whoa, I feel you, Dr. Jekyll.  Stevenson’s tale is summed up in his revelation that “all humans are commingled out of good and evil,” and he pushes this concept to its furthest limits. If you’ve somehow missed this classic, for its originality and timelessness, DR. JEKYLL AND MR. HYDE is still after all these years, worth the read.

9 thoughts on “Worth The Read”