Here’s how it works:  I’ll recommend five books that contain something unique, interesting, or worthwhile.  In short, each book was worth the time it took to read.  Then you decide which ones interest you.  In a read it forward kind of way, I’m hoping you’ll benefit, as I have, from one or more of these suggestions.

So prop up your feet and enjoy this spring weather.  But more importantly, pick up a book, open your mind to something new, and enjoy.

It is no secret that Alzheimer’s is a cruel disease. This is a fact we all know. But in STILL ALICE, Lisa Genova depicts the disease from the inside, from the patient’s perspective. Genova, a Ph.D. in neuroscience from Harvard, unfolds a beautiful yet haunting story about a psychology professor who discovers, at age fifty, that she has early-onset Alzheimer’s. Alice’s discovery is jolting and the creeping progression of the disease is heartbreaking. Books don’t typically make my cry, but this one, because the disease is so cruel and so slow and so much a possibility for all of us, this one made me weep. If I could, I would require everyone I know to read this eye-opening novel before turning thirty. We would all do well to gain a greater understanding and empathy for the victim’s of this brutal disease to which there is currently no prevention or cure. And no matter how much spinach or how many blueberries we eat, every one of us is still at risk. This is not a lighthearted beach read by any means, but it is fascinating, enjoyable, and important in an inspirational sort of way.

With a name like Augusten Burroughs, I knew this writer had to be interesting. And I was correct. Burroughs is not only interesting, but he is hilarious, magnetic and extremely entertaining. And his story is powerful; I’m talking how is he still alive powerful. Burroughs (RUNNING WITH SCISSORS) is a master of memoir and storytelling extraordinaire and he wastes no time drawing the reader into the world of a downward spiraling alcoholic. Coupling raw, honest writing with a fascinating, horrifying story of his ten-year road to sobriety, the result is a memoir that is as engaging as any I’ve ever read. In the words of Burrough’s agent (and husband) Christopher Schelling after he read the first draft, “It’s funny and sad and effed-up and crazy and completely riveting.” What he said, and more. If you are of the opinion that alcoholism is a personality flaw that can be fixed with a little self-control, I urge you to read this memoir, reconsider your position, and see me after class. The CDC defines alcoholism as a chronic disease, and health professionals agree that alcoholics may require a lifetime of ongoing treatment. This one is not for the kids, but if you are looking to be fully enveloped in a book while gaining insight on a very real and debilitating disease, DRY is well worth the read. 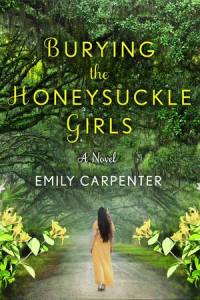 Buckle up, buttercup, and hang on tight because this story is going to take you on a ride like you’ve never experienced. From page one, the plot twists and turns are surprising at least, jarring and haunting at most. Carpenter pulls the reader toward questions surrounding her main character Althea’s ominous 30th birthday, but the more answers Althea gets, the more questions she has. This multi-generational mystery races around the state of Alabama toward a weighty resolution that will leave you both exhausted and relieved. But don’t think you’ll be able to guess the ending; you won’t even be able to predict what’s going to happen on the next page. This treasure hunt for the truth has a GONE GIRL type of urgency sprinkled with a ONE FLEW OVER THE CUCKOO’S NEST kind of crazy. Carpenter’s debut novel couples a fresh, smart voice with a unique, multi-layered story and the result is nothing less than startling. Something tells me we’ll be hearing more from this inventive author and her gloriously wild imagination in the future. 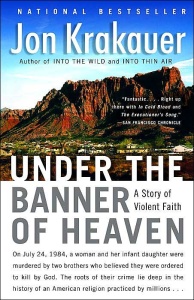 UNDER THE BANNER OF HEAVEN by Jon Krakauer

When a friend of my husband’s, a lawyer and former district attorney, recommended this book to me, I should have known. I should’ve known it would be literary, I should’ve known it would be historical, and I should’ve known it would be a book that would require me to put on my proverbial thinking cap and pull it down tight. And it was. In his wildly popular memoir turned movie, INTO THIN AIR, Krakauer writes about extreme physical adventure, but in UTBOH, he turns to the extreme religious practices of the Fundamentalist Church of Jesus Christ of Latter-day Saints. At the book’s heart is a double murder carried out by two members of the FLDS church who claim that God has instructed them to kill. And kill they do. Krakauer uses the murders as a thread which weaves its way through his study of the history of the FLDS church. And let me tell you, his revelations ain’t pretty. From sexual and emotional abuse to murderous violence to a special strain of religious crazy, this book reveals atrocities you’ll wish you’d never known had taken place anywhere, much less in the US of A. That said, the church of LDS’s response to this book is, as you might imagine, harsh. It includes phrases like full-frontal assault on the veracity of the modern church, poor command of the subject matter, and a disservice to his readers. So it would be appropriate to consider the church’s response when deciding about the accuracy of the information presented. But if you are interested in learning one author’s fascinating take on America’s fastest growing religion–albeit a challenge–this one is worth the read. 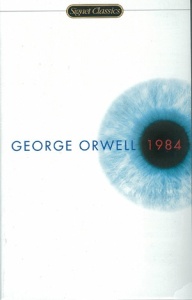 I am uncomfortably aware how very late I am to the Big Brother party, but at least I made it. I finally picked up this novel because my good friend told me it was her son’s favorite book, EVER. And from what I gather, her twenty-something year old son is of Zuckerberg-level intelligence. So that was it, the gauntlet was laid. I was forced to read this once futuristic, modern classic that somehow I had managed to avoid. And what I found was surprising. The premise is simple, the characters and dystopian setting are intriguing, and the end is wonderfully creepy. The themes of control, manipulation, and governmental totalitarianism are ingeniously addressed in Orwell’s fast-moving story. Some might even feel his ideas translate to today’s world–I won’t be commenting on that. But I will say, if you’ve missed this one, read it for yourself and draw parallels if you dare. Either way, it’s quick, significant, and worth the read.

3 thoughts on “Worth the Read two”